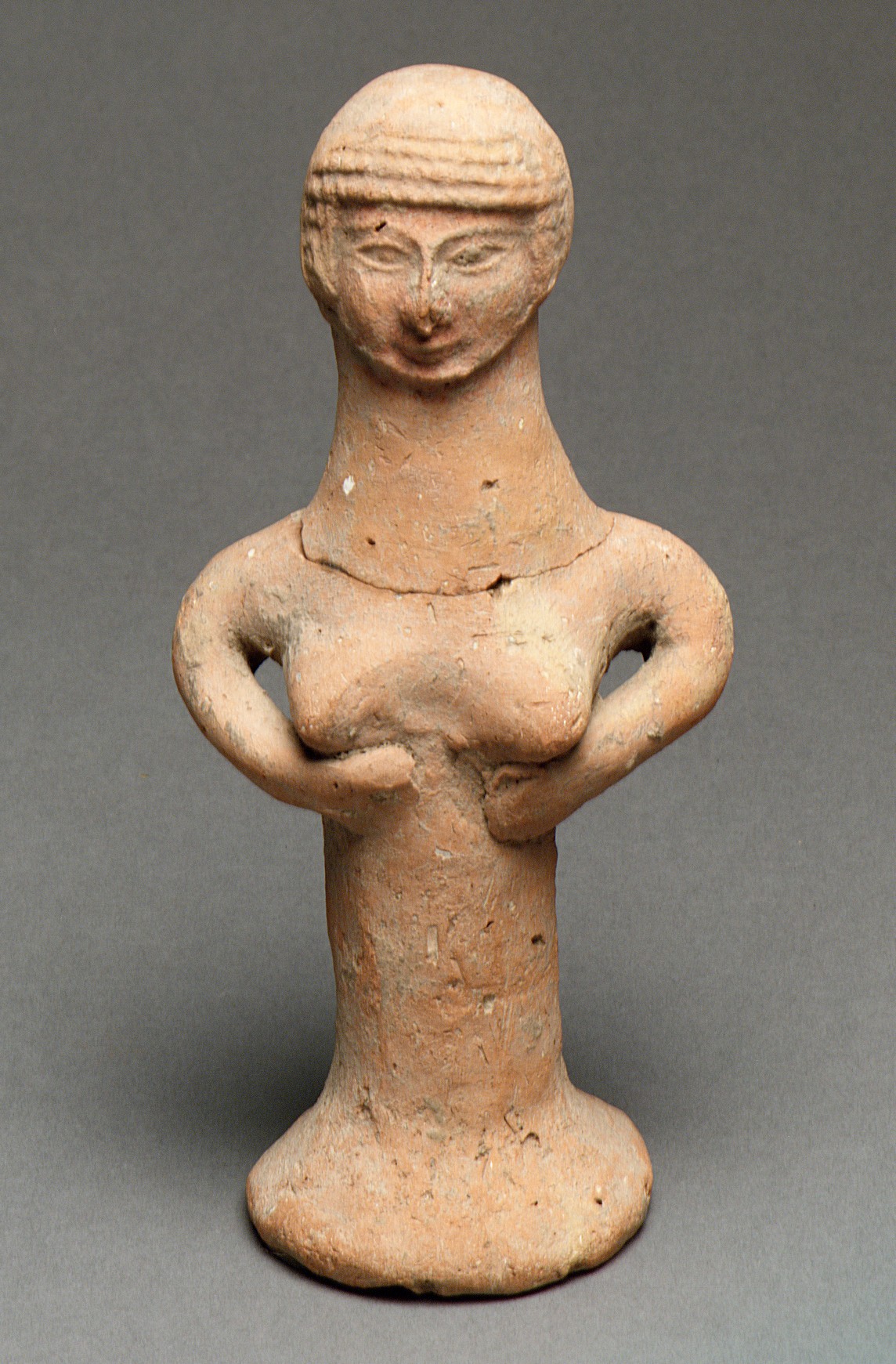 Christ, Carol P. 1990. The chapter on "Symbols of Goddess and God in Feminist Theology" from The Book of the Goddess Past and Present. Olson, Carl. Ed. New York: Crossroad.

Dodge, Edward. 2021. The History of the Goddess from the Ice Age to the Bible. Waterville, OR: Trine Day, LLC.

Marija Gimbutas. 1993. The Civilization of the Goddess: The World of Old Europe. San Francisco: Harpersanfrancisco.

Gelberman, Joseph. 1999. Kabbalah as I See It. The New Seminary.

Raver, Miki. 2013. Listen to Her Voice: Women of the Hebrew Bible. Cork: BookBaby.

Shlain, Leonard. 1999. The Goddess Versus The Alphabet. New York: Penguin.

Telesco, Patricia. 2014. 365 Goddess: A Daily Guide to the Magic and Inspiration of the Goddess. HarperCollins e-Books.

Young, Serinity. 1999. An Anthology of Sacred Texts by and about Women. New York, Ny: Crossroad.

Her Place in History and Religion

"Who is the Goddess? She is the feminine divine (and) she has taken many names and forms through the ages. For those who believe in God, there is a Goddess to match, and her traditions are far older than monotheism, going back into the Ice Age."

Edward Dodge, from The History of the Goddess from the Ice Age to the Bible

Indigenous religions that honored the earth and the Goddess harken way back before Christ was born and existed at the time of his death. And the religions that have been relegated to "mythology" ins modern times were once important and viable ways of worship in ancient societies. Even the most traditional religions had a broader inclusion of the Divine Feminine.

Ancient Mesopotamia. Mesopotamia has a rich goddess history. It was home to the first empire, initiated by King Sargon and spiritually tended to by his daughter, the high priestess and first author, Enheduanna. It was she who wrote the first formal hymns to the goddess, Inanna. Modern Iraq occupies the greater part of the ancient land of Mesopotamia, the plain between the Euphrates and Tigris rivers. Some of the world's greatest ancient civilizations were developed in this area. Therefore, the region is often referred to as the "Cradle of Civilization." In the 1990s remains of the ancient temples of the Goddess were still being found. Many of the antiquities were said to be destroyed or compromised in the Iraq war when The National Museum of Iraq in Baghdad was bombed. But the Ziggurat, which contained the inner temple of the gods and goddesses, still stands.

Ancient Egyptian. This religion dates way back, past 5,000 years, with antiquities of the goddess Isis and son Horus pre-dating the Madonna and child by easily 3,000 years. Just over two thousand years ago, the last Egyptian pharaoh, Cleopatra, worshiped mother goddess Isis and saw herself as a divine female in human form—only thirty-six years before the birth of Jesus Christ. Her beloved Julius Caesar, during his reign, erected temples to the Roman goddess Venus, paying tribute to her as both a love goddess and a mother goddess.

Hinduism. It is among one of the earliest ancient religions that still exists today and it has included the worship of gods and goddesses for over five thousand years. The sacred texts of Hinduism, The Vedas, were among the earliest religious writings that are still honored today.

Greek Goddesses. The Greeks had many philosophies and deep spirituality, but there was no ancient Greek religion, per se. But they did have many gods and goddesses, such as Aphrodite, Athena, and Zeus.

Roman Religion. The Romans had their pantheon of gods and goddesses adapted from the Greeks—Venus, Diana, and Jupiter

Celtic Spirituality. The Celts and the Druids in Ireland, England, and Scotland established the wheel of the year which is still used by modern practitioners to chart their year of worship, holy days, and sabbats. In the early days of Celtic Christianity, when the old religion was traded for the new, the Celts did not want to give up their goddesses so they were transformed into martyred saints. For example, goddess Brigid became St. Bridget.

Early Arabic Culture. The Divine Feminine was still part of the pre-Islamic Arabic culture, which had yet to see the birth of the new religion of Islam. There were more than 300 idols in the holy place known as the Kaaba (built by Abraham and Ismail) and when the new religion was born, they were smashed.

Judaism. There were Hebrew goddesses in the ancient world, such as Anat and Ashera, and they were still around in the era of King Solomon, who married a goddess-loving bride. When Moses received the Ten Commandments they included: "Thou shalt have no other Gods before me." and "Thou shalt not make unto thee any graven image." As a result, people of the Jewish faith are taught to worship God through prayer, ritual, chanting, devotion, and celebration, but not through images. However, the mystical aspect of the religion has kept the feminine and includes the Shekhinah, the indwelling, feminine aspect of God. On the Sabbath, she is called the Bride of God.

Early Christianity. The views of people who are devout in their faith must be respected. But there has been increased study into the early days of the ministry of Christ. Some people continue to see Mary Magdalene as a sinner but The Gnostic Gospel of Thomas, discovered in 1945, indicates Mary Magdalene appears as a disciple, singled out by Jesus for special teachings.  Some feminist scholars believe it's conceivable that Mary Magdalene was the wife of Jesus, or, at the very least, his spiritual soul mate and first disciple. Controversy aside, it is unanimous around the world that Mary, the mother of Jesus, is a beloved divine being. She is the spiritual mother for people of all faiths. She is a divine figure who is seen as a healer and a compassionate sacred female to go to for support. For many years, she was the most visible and accessible female of a holy nature.

"The symbol of the Goddess was not merely omitted from the Jewish and Christian Cannons.

- Carol P. Christ,  "Symbols of Goddess and God in Feminist Theologuy" from The Book of the Godess Past and Present

What caused the End of Common worship of the Divine as Feminine?

Over time, the Goddess got a bad rap and was relegated to mythological status.

"Archaeological, mythological, and historical evidence all reveal that the female religion, far from naturally fading away, was the victim of centuries of continual persecution and suppression by the advocates of the newer religions which held male deities as supreme," writes Merlin Stone, in When God Was a Woman. "And from these new religions came the creation myth of Adam and Eve and the tale of the loss of Paradise."

Carol P. Christ put it as bit more strongly in her chapter, "Symbols of Goddess and God in Feminist Theologuy" fromt The Book of the Godess Past and Present in 1990. "The symbol of the Goddess was not merely omitted from the Jewish and Christian Cannons. She was evicted."

But in recent years, honoring the Goddess has seen a revival, in both spiritual and self-help communities.

"The Great Goddess, the female deity who devotees say reigned over people's souls in prehistoric times, is making a comeback in the spiritual lives and academic thought of feminists across the country," reported Irene Lacher, in a trend piece called She Worship: Return of the Great Goddess in the Los Angeles Times, on Sept. 19, 1990.

"While goddess followers are generally resurrecting a female-centered form of pagan worship, the oft-used term "goddess movement" is something of a misnomer," she said. "Its adherents aren't organized. There is no one way to commune with the goddess, no coherent doctrine to which everyone subscribes; rather, there's a smorgasbord of beliefs and rituals from which worshipers can pick and choose."

Whether a personal interest or a spiritual pursuit, changing attitudes about the Goddess have made access to her historical treasures even more important. This is where public history comes in.

Luckily for us, the proof of Her existence continued to live on in statues, art, books, stories, cuneiform, and sacred sites around the world. And if you can't get to an archeological dig, she may be appearing at a museum near you.