Who Is Green Tara?

Tara is the beloved Tibetan Buddhist mother goddess. Monks and devotees around the world chant and evoke her energies daily, calling upon her for everything from world peace to inner peace and protection. Considered a female Buddha, she represents All That Is; her energy can permeate all things. Tara is worshipped in both mild and wild forms, and exists in a rainbow of colors reflecting her various attributes. The Green Tara and White Tara of the Tibetan Tantric tradition are the most popular forms, with Green Tara seen as her fiercer, most dynamic form. As such she is a goddess of action, strength, and special protective powers, who wards off evil and shields you from spiritual harm.

According to the mythic tale, she was born from the tears shed by Avalokiteshvara, the Buddha of compassion, as a gift to end the suffering of all creation. The tears trickling down the left side of the Buddha's face formed the motherly and mature White Tara and the salty drops on the right birthed the fearless and youthful Green Tara. Her legend is somewhat similar to Kuan Yin's; some believe that she was a human princess who lived a life of the highest compassion and spiritual aspiration, dedicated to serving the Buddhist monks. Because of her path, she earned the right to be reborn in male form and teach the ways of the Buddha. She told the monks that since the concepts of male and female were only illusory; she would remain in female form until all of humanity was liberated from illusion and reached enlightenment. She is depicted as a slender Asian woman with jade green skin and adornments, sitting on a lotus with one leg folded in front of her in the traditional meditation pose and the other leg extended and ready to leap into protective action.

"The worship of goddess Tara is one of the most widespread of Tibetan cults, undifferentiated by sect, education, class, or position; from the highest to the lowest, the Tibetans find with this goddess a personal and enduring relationship unmatched by any other single deity."

—STEPHEN BEYER, THE CULT OF TARA 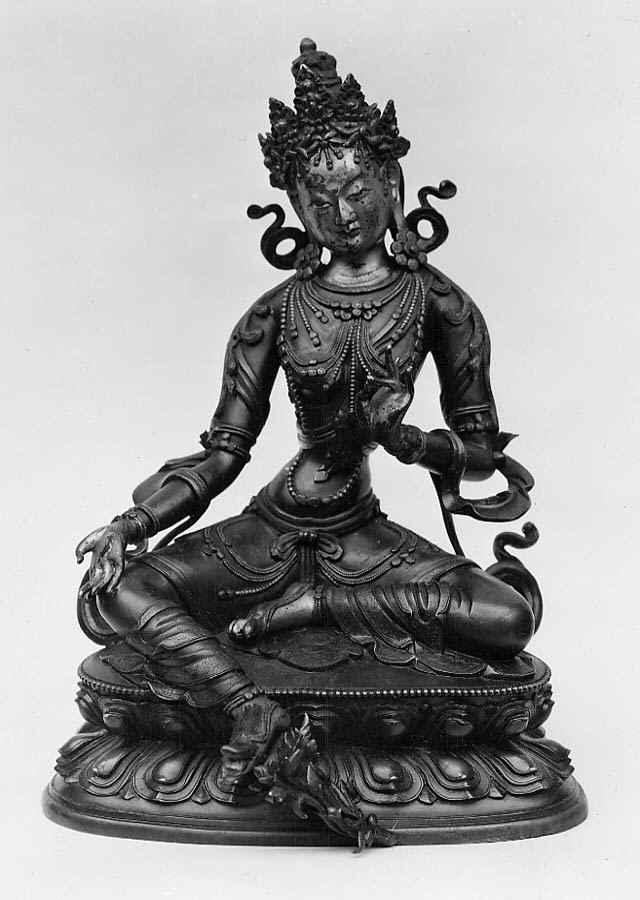