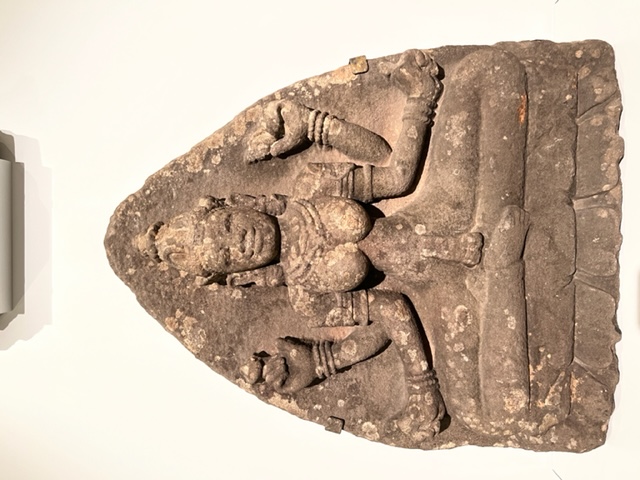 This Beautiful Statue of Lakshmi, the Hindu goddess of fortune, is an Ancient and Holy Icon

at The Brooklyn Museum

She appears to be smiling, which is a common trait in representations of Lakshmi.

Finding Her in Public History

"From deep history to the present day, goddesses, spirits, demons, holy women, and other manifestations of feminine authority have played a significant role in shaping historical and contemporary beliefs and cultures around the world. This exhibition brings together sacred and secular art and artifacts from six continents, displaying objects from as early as 6000 BCE and as recent as 2021 to explore the importance of female representation in global religion, spirituality, and folklore."

-Hartwig Fischer, Director, British Museum, from Feminine Power: the Divine to the Demonic,

The Goddess is all over the world. And to some, she is the world. Her presence can be found almost anywhere.

One of the ways we can truly see her influence is to see how she is included in public spaces. Walk any city and you can find her in museums, parks, public statues, carvings on buildings and statues, sometimes high atop buildings.

I took several months to take a goddess-focused approach to life and look for her in public places. This website shares my findings, my photos, and my ongoing research of new goddess discoveries and goddesses in the news that bring new insights to her existence in our world on a daily basis.

Sometimes a goddess is just viewed as a work of art, and sometimes she is seen as a personification of feminine divine energy. One thing is for sure, you can find representations of her all over the world!

Some of the Goddess's Public History Appearances

She comes alive through different aspects of public history. Sometimes we seek her out, and sometimes we happen to stumble upon a statue in a park or notice her flying high on the very topic of a public building, like Nike who watches over the city from her perch on the tower of the Municipal Building in Manhattan. Here are just a few ways she is present in public history.

Museums. The goddess lives in museums across the planet. You can usually find her in any art museum. There are some countries or cities that have more antiquities than others, but even smaller museums have goddesses in the house.

Goddess exhibits. There have been special exhibits from time to time, that will hopefully become more frequent. The British Museum brought us Feminine Power. The Harn Museum of Art in Florida put the focus on Hindu Goddess Durga. The Morgan in New York City will offer Enheduanna and the Women of Mesopotamia, which will include ancient worship of the Goddess. The Izmir Archaeology Museum is brought out artifacts dedicated to the ancient Greek goddess Nike for a special exhibition series.

House Museums. Statues of goddesses are often found in historical homes, such as Victorian era manors or gilded age abodes. There is also a trend in turning modern homes with antinque collections, cool art and statues into house museums open for public view. For example, there is a bust of the Greek goddess Athena in this  house museum in New Zeland.

Temple tours and sacred sites. These places may not all be in our own backyard, but they are part of the heritage of the particular culture in which they originated. And they are not just meant for tourists. Even public historians in Egypt work toward getting the local population involved with all the wonders of their country.'

Ancient history classes.  Learning about goddess history is another way she is brought into public memory. Sometimes you can take a course on any ancient culture and parse out the stories of the divine feminine. She is there, any time you choose to learn more about ancient Greece, Mesopotamia, Malta, or Rome.

Modern statues. Goddesses abound in modern statues, or more recent statues, and you can find them in cities, parks, and outside of buildings in fountains. Open your eyes and look around.

Ancient statues. These can be in museums, on the outside of museums, or just about anywhere in certain cities. New York has a couple of goddess statues outside of Central Park.

Goddess fountains. The goddess fountain is a classic around the world, from the famous to the hidden gemes. Madrid has a statue of Cybele on a fountain that is meaningful to all who visit and Trivoli has Diana of Ephesus.

Goddess art. She is depicted in artwork from the earliest times, and from the most modern times. Sometimes modern art is of ancient goddesses and sometimes it represents new interpretations. More diverse goddesses are coming to the fore, as new artists are given a chance.

Goddess sculptures and installations. From the Medusa seven-foot statue across from Criminal Court in New York to the modern Mama Wata sculpture that replaced a confederate Robert E. Lee Statue in New Orleans, the public goddess statue has become more prevalent.

Goddess statue controversies. The controversies that surround public statue installations are also a big part of public history, as are the incidents of vandalism and destruction, such as that visited upon Medusa. Both the Medusa and Mama Wata statues have been taken down since the initial installation. (I went to see Medusa and found an empty square where she once stood). It was said this was because they were meant to be on display for a limited about of time.

Museum-related activism. Certain moments in history have brought forth activism related to goddess statues and women's issues, such as the 1989 feminist bus ad campaign that asked: "Do women have to be naked to get into the Met Museum?" More recently, fans of the Greek Goddess Hekate have started a petition demanding that the British Museum leave her statue in public view after the Feminine Power exhibit is closed.

Goddess reparations. In recent years, there have been many battles to get museums to return sacred goddesses that were taken from their culture of origin and there have been increasing incidents of these items being returned.

Documentaries. Goddess stories from different cultures are being told and some are controversial.

Goddess archives. The Brooklyn Museum has goddess-friends and feminist-friendly archives, and universities have collections from some of the famous authors of goddess books. For example, Pacifica Graduate Institute has the library and research collection of Marija Gimbutas.

Space expeditions.  While this is not quite public history, it may be someday when things found on the moon end up in our museums. Artemis 1, named after the Greek moon goddess, is initiating a string of missions to the moon and beyond. This project is governed by the Artemis Accord, which is "the first multinational agreement to acknowledge the historical value of sites of space exploration" and to protect that heritage. The goddess, who is considered by many to be the moon, is going to the moon. That's historical!

These are just some of the ways we find The Goddess and Public History connections.