The Goddess lives in many famous works of art but this exhibit focuses largely on statues, large and small, in museums, at sacred sites, and in the wilds of city streets and parks.

Ancient statues seem to have an energy of their own. Perhaps because they were so honored in their day, and have been admired for thousands of years. More modern replicas and renditions may also radiate spiritual energy and power.

Just as beauty is in the eye of the beholder a connection to a divine statue may be a unique and potent experience. And it is usually a very personal experience for one who feels moved in the presence of a certain statute, or even, by a photo of the statue.

This goddess is just one example of the many I met by wandering around local museums. I stumbled upon her in the Greek collection and stood around her for a while. Tyche and Fortuna are respectively the Greek and Roman goddesses of fortune. She brings good tidings and abundance to people.

This statue seems to have a life of her own, but she is a bit of blended antiquity in that he is carrying the name of both goddesses and she was restored with "the portrait head of a woman." We don't really know whose head it is but it helped repair her at some point in history long before our time.

While museums are filled with statues with missing limbs and smushed noses (which were sometimes cut off to deface the diety, especially in times of regime changes or political struggles, and sometimes to protect their sacred energy. But taking off the nose of a perfectly sculpted divine figure, they are released as divine harbingers out of respect, so that if they fall into the wrong hands they cannot be used improperly.

This goddess is tall, and regal, on a high pedestal. She has a compelling presence. I took a lot of photos of her from many angles and I felt drawn to hanging around her for a while. That's the power of connecting with the Goddess in the form of a statue. She looks sort of real like she could be a mother, sister, or friend, as well as a divine ruler with powers and grace.

In this statue, she is holding a cornucopia in her left hand and a steering paddle in her right, which are tools of her trade. She is an adaptation of the Greek original.

When you look at images, or originals, of similar statues, you get a clearer sense of how the repairs made to her altered her look. They probably altered the energy of the statue, too. Still, she exudes a certain power. It seems that one of the glories of statues like this, and many ancient statues that are missings some of their original parts, is that they are still appreciated. And they are still lovable.

If you come across a goddess who seems to call you, do a quick Internet search and see if you can find an article by someone who has studied the goddess. Reports from people who have personal experiences with a goddess are helpful as well and they may include additional photos that offer additional images of the goddess. For example, here is a very helpful article on Tyche/Fortuna that can tell you a great deal about her history and worship.

As you will discover, she is known as the firstborn of the god Jupiter, and therefore she represents luck and fortune. But as the personification of luck, she can also be fickle.

May she bless us all with her most positive aspects! Here's to good things, and great health and prosperity.

"Fortuna, in Roman religion, goddess of chance or lot who became identified with the Greek Tyche; the original Italian deity was probably regarded as the bearer of prosperity and increase. As such she resembles a fertility deity, hence her association with the bounty of the soil and the fruitfulness of women." 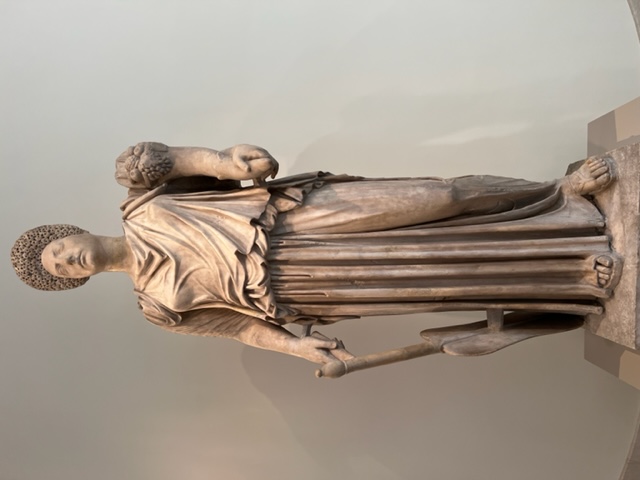 Marble Statue of Tyche-Fortuna at the Metropolitan Museum of Art, 1st or 2nd Century A.D.