Divine and Historical Figures Come to Life Through Ancient Polychromy. Photos and article from, Chroma: Ancient Sculpture in Color at the Metropolitan Museum of Art. 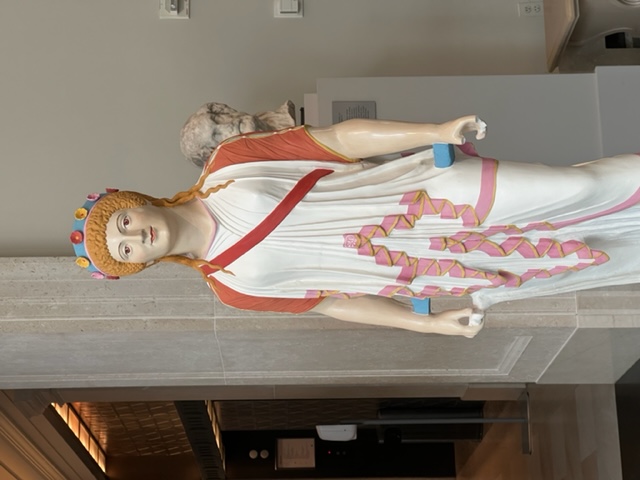 The Reconstructed Athena from the Front View

The Original Statue that the Reconstructed Athena Was Created From 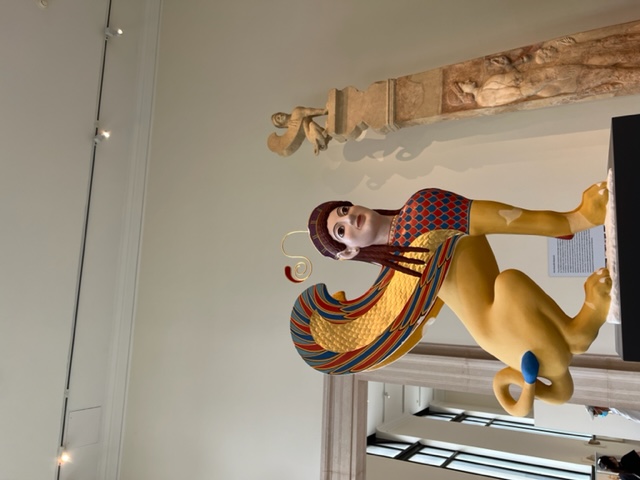 The Shinx and One of Her Original Versions 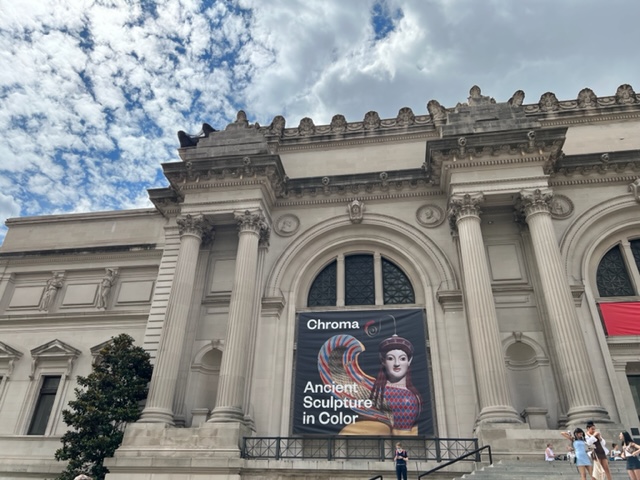 The Met Welcome Visitors to Chroma

Athena and the Sphinx at Chroma at The Met 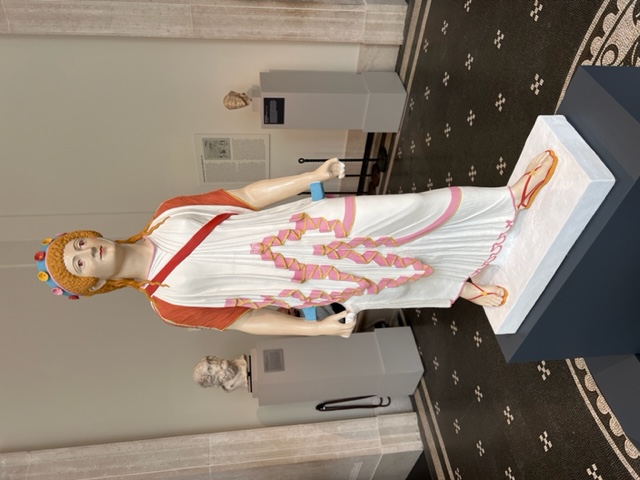 The Reconstructed Athena In All Her Glory

Did you know that all the ancient statues that seem to be made of gray stone and dull tones originally were painted? And that their color wore off over time?

I was really excited to finally get to see the new exhibit Chroma: Ancient Sculpture in Color at the Metropolitan Museum of Art, which explores the way statues used to be in ancient times and offers many reconstructed versions to give viewers a sense of the original antiquities.

Of course, I was scouting out the Goddesses and was happy to find a gorgeous reconstructed Athena statue and a beautiful rendition of the ancient and mysterious Sphinx, who has goddess status in the eyes of many.

It was interesting, colorful, and also a bit invigorating to see recreations of such ancient works of art in living color.

Several statues of reconstructed deities or humans are scattered throughout the large Greek and Roman areas of the Met, and the rest are relegated to room 172 on the Mezzanine. So keep an eye open because the statues pop up in various places along the corridor, tucked amid other exhibits, and the Sphinx can be found in its own room with ancient originals.

There is a fascinating video in 172 there that explains how all the ancient statues found over the years began in color, and the colors faded. It is believed the colors bring the statues/deities alive. I think the topic matter is so important because I believe the Divine being sometimes more easily comes alive for people when we see Her/Him in color.

I have to say that all the reconstructed statues were quite striking. The females all look like Goddesses to me but some were recreations of statues of humans.

I wished they could all be in one room and easier to view at once, but the museum tried to place them near the original art that these statues were modeled after. I also wished there could be more of these statues. I was very fond of the Athena statues and the Sphinx. The Spinx will be permanent at the Museum.

The museum website explains the exhibit this way: "Ancient Greek and Roman sculpture were once colorful, vibrantly painted, and richly adorned with detailed ornamentation. Chroma: Ancient Sculpture in Color reveals the colorful backstory of polychromy — meaning "many colors," in Greek — and presents new discoveries of surviving ancient colors on artworks in The Met's world-class collection. Exploring the practices and materials used in ancient polychromy, the exhibition highlights cutting-edge scientific methods used to identify the ancient color and examines how color helped convey meaning in antiquity, and how ancient polychromy has been viewed and understood in later periods."

"The exhibition features a series of reconstructions of ancient sculptures in color by Prof. Dr. V. Brinkmann, Head of the Department of Antiquity at the Liebieghaus Skulpturensammlung, and Dr. U. Koch-Brinkmann, and introduces a new reconstruction of The Met's Archaic-period Sphinx finial, completed by The Liebieghaus team in collaboration with The Met. Presented alongside original Greek and Roman works representing similar subjects, the reconstructions are the result of a wide array of analytical techniques, including 3D imaging and rigorous art historical research. Polychromy is a significant area of study for The Met, and the Museum has a long history of investigating, preserving, and presenting manifestations of the original color on ancient statuary."